Shakshuka for a Healthy, Veggie-Packed Breakfast 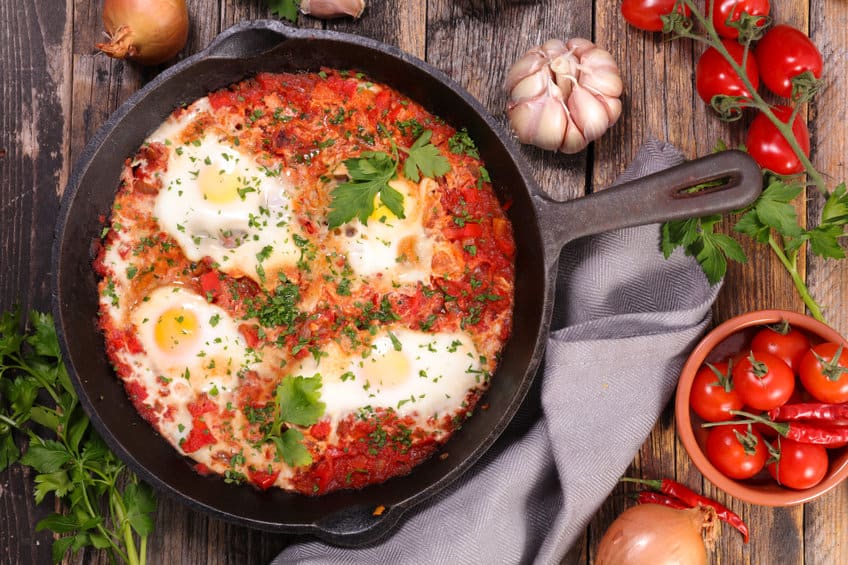 In Israel, Shakshuka means breakfast and is pronounced Shahk-SHOO-kah. Sometimes it is spelled Shakshouka, Shakshuka, the dish, reportedly originated in North Africa but is a popular Middle Eastern breakfast dish.

I’d been looking at Shakshuka recipes for a while when my husband made this dish for a Sunday breakfast. As I often do when cooking something Middle Eastern, I consulted our good friend Justin Soltani for recommendations. Justin and some of his family members make the most amazing Persian food. We have been blessed to partake of their hospitality on numerous occasions. They can dance all night! When asked, my husband and I have both said Justin’s is our favorite place to eat. And no, Justin does not have a restaurant.

In this dish, the eggs are poached in a sauce of tomatoes, olive oil, bell peppers, onion and garlic, and commonly spiced with cumin, paprika, cayenne pepper, and nutmeg. Justin’s recommendations helped form our spice combination in this particular recipe, giving it a Persian flair. Justin makes his own garam masala, but we used some we purchased and had on hand. If I make a blend, I’ll come back and link to that recipe.

Traditionally, pita or challah bread soaks up the delicious veggie sauce in shakshuka. However, we prefer it alone – without the carbohydrates from processed grains. Alone, this recipe uses nutrient-dense, whole foods to nourish the temple of your soul.

Shakshuka is a one-skillet, vegetarian dish. It makes a great alternative to a typical American breakfast that might consist of cereal and toast or a bagel. If you want a great start to getting those 5 to 9 servings of fruit and vegetables into your diet, try shakshuka for breakfast. Don’t limit this dish to breakfast though. Alternatively, shakshuka makes an impressive brunch or even a delicious lunch or dinner. 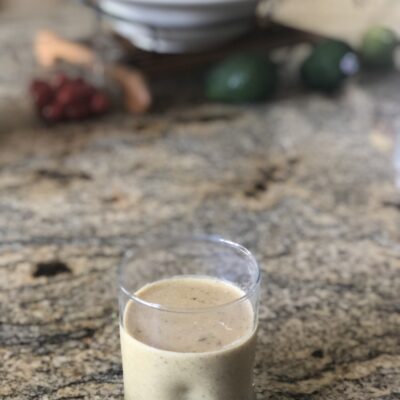 This is definitely a smoothie you'll want to make multiple times. You can add more ice and less milk if you want it thicker. If you want a plant-based version, you could use a pea protein.
Keyword Easy Summer Dessert, Gluten-Free, Healthy Breakfast, Paleo, Plant-based
Tried this recipe?Let us know how it was!

Get Terri's health articles and allergy-friendly, anti-inflammatory recipes delivered directly to your Inbox.

I respect your privacy. Your personal information will not be shared or sold. You can unsubscribe at anytime by clicking on the Unsubscribe link. By clicking SUBSCRIBE you consent to receive information from me via email about my products and services in accordance with the TerriWard.com Privacy Policy.

Our store is currently in development — no orders shall be fulfilled. Please give us a few days to finish things so it functions properly for you. 12/08/22 Dismiss